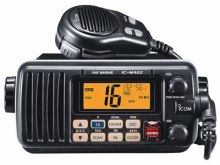 Non-shipdrivers will have to forgive me for this one. SWOs and submariners have several habits that make us look like a bunch of goons to the professional mariners trying not to run us over. Among them is our habit of delegating bridge-to-bridge radio communications to some of our least experienced junior officers, as well as an overreliance on B2B in general. The following are just a few pointers which I hope will help you communicate like someone who drives ships for a living:

Don’t Use B2B if You Don’t Have To. The Rules of the Road are designed to alleviate the need for cumbersome, confusion-inserting transmissions between ships. Professional mariners have a mysterious tendency to abide by them—assume they will unless you have evidence to the contrary. Avoid asking someone “what are your intentions” if “I’m going to follow the rules, dumbass” would answer your question.

What makes this harder, and makes warships especially dangerous to everyone around them is our pathological unwillingness to take contacts within 4000 yards. Commercial mariners have no such aversion, and are often comfortable at 1500 yards. In open ocean, if you can keep your single contact far away by altering course five degrees, that makes sense, as there’s no reason to get close. As you approach a port and the contact picture gets denser, this gets silly very fast. Making unexpected, erratic course and speed changes to keep everyone far away is futile and dangerous.

However much it pains you, use simple, conversational language

Much of this bad habit comes from the ubiquitous CO’s standing order that the commanding officer must be informed of any contact within XX yards. Absent a specific order, don’t interpret this to mean “keep all contacts outside of XX yards.” It just means the captain needs to be aware. Drive the ship. Your job is to do the prudent thing, even if the prudent thing is to take a guy close. Just put it in your report:

“Captain, I have an outbound merchant 7000 yards down track; he will CPA 3000 yards off our port beam in twelve minutes. I intend to maintain course and speed.”

99% of COs will say something to the effect of, “Okay, sounds good.”

Think, Key, Pause, Speak. In exactly that order—don’t hold down the button while you figure out what you’re going to say. A one-second pause is helpful to keep from cutting off your first word, which is a common error of people who fancy themselves as slick radio talkers. Speak into the mic; don’t yell at it and don’t try to eat it—either will cause the transmission to clip, making you harder to understand.

Speak from Their Perspective.

What you are actually saying is: “All ships, everywhere, look out for the warship that may be near you. It is dangerous… because it is full of idiots.”

Instead, look at it from their perspective, and immediately remove ambiguity as to whom you are addressing. Most large vessels transmit on AIS; the most valuable piece of information this can give you is their name. Try this:

“OILY HORIZON, this is U.S. Warship 3 miles off your starboard bow…”

There, now there’s no doubt who you’re addressing. Just double-check to make sure you’re addressing the right ship. If you don’t have their name, use their course or a landmass as a frame of reference:

“Westbound tanker south of Barbers Point, this is U.S. Warship 3 miles off your starboard bow”

Consider language barriers. Half of a language barrier is more dangerous than a total one, because you may think you understand each other when in fact you do not. For example, consider the case of a head-on situation approaching the entrance to a channel:

“OILY HORIZON, this is inbound US Warship one mile in front of you; I’m going to pass you port to port, over.”

We like to say that “port to port” thing, for some reason. It sounds nice to us. Unfortunately, to someone who barely speaks English, it sounds a lot like:

Remember that “I intend to leave you on my port side” is from the INLAND rules—there is nothing like that in INTERNATIONAL, there is only “I am altering my course to port.” So now, instead of communicating “I’m going to keep doing exactly what I’m already doing, and so should you,” you might have communicated “I’m about to turn directly in front of you, so you’d better turn left as well.” This little nuance has actually caused collisions. One alternative is to say “red to red.” Another option, which I generally prefer, is to never pick up the damn radio in the first place.

Speak plainly. They might not speak English, and they definitely don’t speak Navy. In almost any situation complex enough to warrant B2B comms, using Navalese will only add confusion. If it takes you more than five seconds to figure out how to twist your message into something stiff and formal, they’re probably not going to understand you anyway. Just say it. However much it pains you, use simple, conversational language. Talk in miles, not yards. Don’t say CPA. Be polite and affable, and always call the other guy “Captain.”

Beware complex pre-planned litanies, like those on your response cards for queries or NVPZ violations. They are often written in the language of lawyers, not mariners. Say what you must to satisfy the procedure, but consider following it up with “You are too close, turn now or I shoot you.”

Use the Whistle. Your ship is equipped with a functioning whistle. If you are in international waters in sight of other vessels, you are required, repeat, REQUIRED to use it—a classic example of the importance of discerning “may” from “shall.“ There is good reason for this requirement—the whistle is a quick and simple way to communicate across language barriers. Don’t take it for granted that they will hear it (not sure? check out Annex III), but don’t write it off as an outdated holdover, either. Radio comms have been around for a long time, and yet we still use whistles.

Don’t Tell Them What to Do. I know you don’t care about legal ramifications, but I promise that your bosses do. To a merchant ship, you are a chimpanzee with a bazooka. What sounds to you like a casual suggestion that would keep them out of your 4000-yard comfort zone may sound to them like an order under threat of force—especially if English is not their primary language. If doing what you say drives them into some mishap, it could drag the Navy into a nasty legal mess. Just don’t do it unless you have to.

7 thoughts on “Talking to Ships”